Things to do on Memorial Day > St. Augustine

10 Incredible Things to do in St. Augustine on Memorial Day 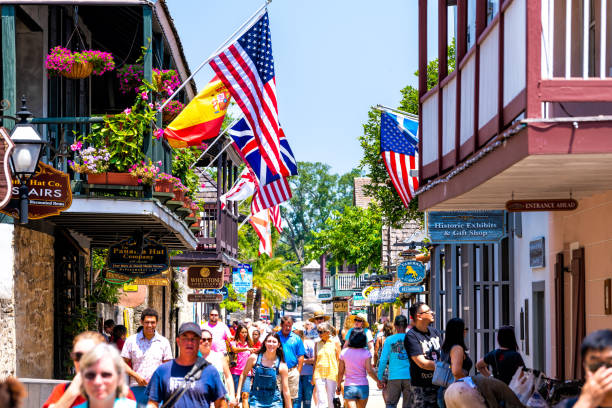 Antiquities, historic attractions and delectable cuisine are just a few of the things you'll find on St. George Street, the city's central pedestrian thoroughfare. At the northern end of the street, visitors on Memorial Day can explore boutiques like Sunburst Crystal and Tillie's Bath Cottage, as well as historic sites like the Old City Gates and the Oldest Wooden School House. The Castillo de San Marcos National Monument and the St. Augustine Pirate & Treasure Museum are within walking distance; as you travel south, you'll see additional shops and cafes, plus art galleries and the Colonial Quarter.

Visitors in search of southern charm will appreciate St. George Street. According to past travelers, you'll find unique shops and some of the best ice cream in the area. The area is also a great spot to stop in some shops to pick up souvenirs. It's also a featured stop on many of the best St. Augustine ghost tours.

Castillo de San Marcos served as a fort for more than 205 years. Built between 1672 and 1695 by the Spanish, it protected the newly established territory of Spanish Florida from the British and pirates. It's the oldest masonry fortification in the U.S., as well as the only surviving 17th-century military site in the country. Additionally, it is one of only two forts in the world constructed from coquina, a semi-rare limestone composed of shell fragments. Though the Spanish maintained control of the Castillo de San Marcos for most of its military career, it was used by the British during the American Revolution and by Confederate and Union soldiers during the Civil War. The fort became a national monument in 1900.

According to recent travelers, the monument is a well-preserved and interesting piece of American history. To avoid the heat when visiting on a humid, sunny day, arrive when it opens (9 a.m.) or shortly before final admission at 5 p.m.

Whiskey lovers will feel right at home on a trip on Memorial Day to St. Augustine, thanks to the St. Augustine Distillery. Founded in 2013, the family-owned and -operated spirit crafter makes whiskey on-site daily. In addition to whiskey, the distillery also produces gin, bourbon, vodka, rum and more. The attraction is housed in St. Augustine's original power and ice complex, built in 1907. Travelers can enjoy free tastings and self-guided tours seven days a week.

Recent visitors reported having a great time at the distillery, and they were especially impressed that they didn't have to pay anything to enjoy the experience. Others liked that they were able to explore the premises at their own pace instead of being hustled along in a guided tour. For an extra special trip, some recommended the Fill Your Own Bottle Experience, where you can fill and personalize a bottle with a bourbon of your choosing (fees apply).

Located on St. George Street in downtown St. Augustine's historic district, the Colonial Quarter offers visitors a glimpse into the lives of 16th-, 17th- and 18th-century residents. The living museum is divided into four areas: the 16th Century Spanish First City, the 17th Century Spanish Fortified Town, the 18th Century Spanish Garrison Town and the 18th Century British The 14th Colony. In each section, travelers can witness activities like the construction of a ship, musket drills, leatherworking and cannon firing demonstrations.

Families and history buffs will enjoy exploring the Colonial Quarter. Previous visitors praised the guided Historic Adventure Tour, which is included in ticket prices. Though you can explore the property on your own, the tour guides offer interesting historical tidbits that help you fully understand what life was like in colonial St. Augustine on Memorial Day visit.

The St. Augustine Lighthouse & Maritime Museum features shipwreck artifacts, a wooden boat building exhibit and a 165-foot-tall lighthouse. The lighthouse, which was built between 1871 and 1874, is the oldest surviving brick structure in St. Augustine and has 219 steps. Some also believe the site is haunted by several formal lighthouse keepers and two young girls who died on-site in the late 1800s (which may be part of the reason why the lighthouse is featured on many of the city's ghost tours).

Recent travelers said the best part of visiting the St. Augustine Lighthouse & Maritime Museum is climbing to the top of the lighthouse. Bring a camera, since you'll find breathtaking views of Salt Run lagoon and St. Augustine at the top. However, a few people caution that climbing the lighthouse may not be easy for less active visitors.

Situated 5 miles southeast of St. Augustine's historic district, St. Augustine Beach features roughly 2 miles of white-sand beach and clear water. The beach is popular with families, thanks to its kid-friendly splash pad. If fishing or a relaxing stroll is what you're after, visit the St. Johns County Ocean and Fishing Pier, which sits at the north end of the beach.

Past visitors praised St. Augustine Beach's scenery and uncrowded atmosphere. Most days, the ocean offers small waves that are suitable for children, though windy days will bring larger waves that are ideal for surfing and bodyboarding.

Recent travelers said the museum's Spanish Renaissance Revival architecture and collections more than justify the attraction's entrance fee. With four floors of exhibits, you can easily spend several hours exploring the property. And if you're hungry, grab a bite in the museum's cafe. Although it's only open for lunch, visitors say the food is delicious.

Animal lovers of all ages will enjoy a visit to the St. Augustine Alligator Farm Zoological Park on Memorial Day weekend. The park was founded in 1893, but has been in its current location since 1920. It was accredited by the Association of Zoos and Aquariums in 1989. It is home to alligators, snakes, lemurs, sloths and many types of birds, and it is also known as the only facility on Earth to house all 24 living crocodile species. While here, visitors can explore the exhibits on their own and enjoy interactive wildlife shows and animal feedings, which are offered throughout the day. For an extra thrilling experience, be sure to pay a visit to Crocodile Crossing, a 7-acre, 35-foot-tall zip line course that soars over alligators and crocodiles (additional fees apply).

Recent visitors said this attraction was better than they anticipated, noting it was an especially fun stop for young children. Others noted that the staff were very friendly and knowledgeable. Still, some felt that the ticket prices were a bit steep for what was offered inside the park.

Ponce de Leon's Fountain of Youth Archaeological Park is the site of St. Augustine's original settlement. Here, you'll learn about the Spanish settlers who arrived in the 1600s, as well as the Timucua, a group of Native Americans who resided in current-day southern Georgia and northern Florida. The Fountain of Youth, a mythical spring believed to have anti-aging properties, can be found in the park, as well as a planetarium, a blacksmith shop and a replica Timucua village. On the park's grounds, visitors on Memorial Day will find several white and blue peacocks (nearly 30 reside within the park).

Though some travelers found the attraction to be lackluster and not worth the entrance fee, most said it's an important archeological site worth checking out. Must-do components of the park include drinking from the Fountain of Youth and watching a cannon firing demonstration. Keep in mind that this spring has sulfur water, which exudes a rotten egg odor.

A private institution founded in 1968, Flagler College boasts lush gardens, sparkling fountains and stunning Spanish Renaissance architecture that St. Augustine travelers can explore. Built by Henry Flagler in 1888, the college was originally the Hotel Ponce de Leon and is considered a National Historic Landmark. Visitors can tour the grounds on their own or by signing up for a guided excursion through the school. Additionally, some trolley and historical sightseeing tours include stops at Flagler College.

Recent visitors were fascinated by the history of the expansive, nearly 50-acre property, noting that their tour guides were knowledgeable and friendly. They were also impressed by the intricate, well-maintained buildings and gorgeous surroundings. 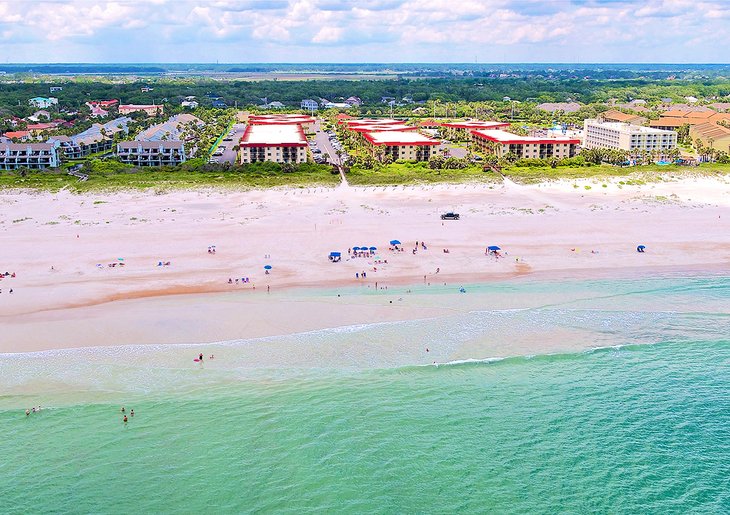 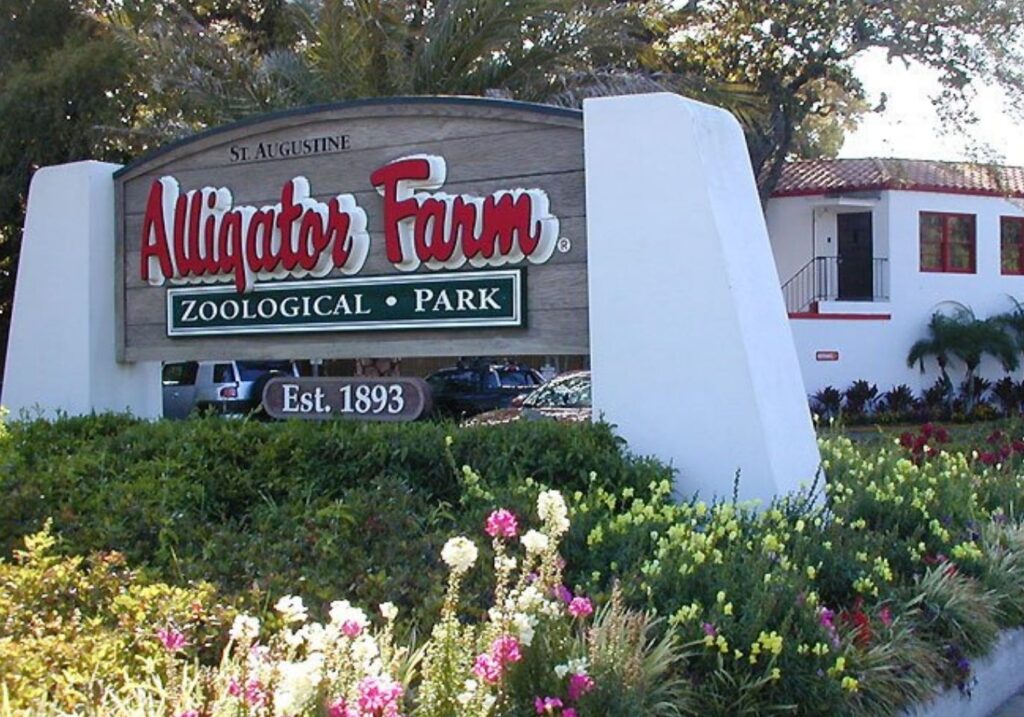