Things to do on Memorial Day > San Francisco

8 Amazing Activities to do in San Francisco on Memorial Day 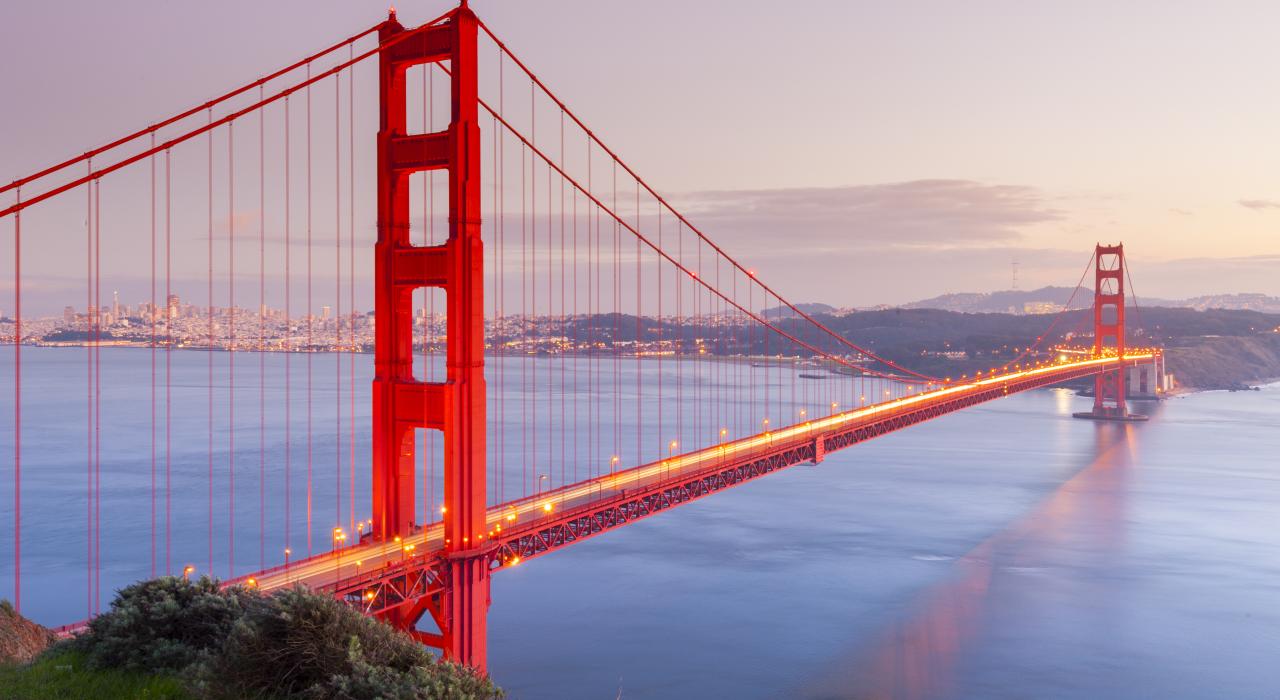 The Golden Gate Bridge is a California icon gracing San Francisco Bay. It is the most photographed site in the city on Memorial Day, with the orange structure backed by blue water, or in many cases, peaking through low lying cloud. At night, the flood-lit structure is equally striking.

Connecting San Francisco with Marin County and other districts further north, the Golden Gate Bridge was, at one time, designated the greatest man-made sight in the United States by the U.S. Travel Service. Opened on May 28th, 1937, the bridge took four years to build and at the time of its completion, was the longest suspension bridge in the world, measuring approximately two miles in length.

If you want to drive over the Golden Gate Bridge, the road is US Hwy 101, or SR 1, and walkways on either side of the bridge are open to pedestrians and cyclists. The walk begins at the start of the bridge (accessible from the Presidio shuttle) and ends with a viewpoint in Marin County.

For a great view of the bridge, or for anyone interested in photographing the bridge, there are a number of ideal vantage points. From the San Francisco side, Nob Hill, an area known for its posh old mansions, offers some beautiful views over the bridge.

On the opposite side of the bridge, in Marin County, Golden Gate National Recreation Area is another good place to visit. Also, if you are planning on taking a tour to Alcatraz, there are completely open views from the boat and island.

The historic and notorious Alcatraz penitentiary, located on Alcatraz Island in San Francisco Bay, is one of America's most infamous prisons. It operated for almost thirty years, closing in 1963 and re-opening as a tourist attraction in 1973. Some of America's most well-known criminals were inmates here, including Al Capone and the "Birdman," who would later form the basis for the fictional movie The Birdman of Alcatraz.

On Memorial Day, you can take a ferry over to the island and tour the site while listening to an exceptional audio recording that offers a glimpse into life in the prison, rather than just a historical list of the facts. The narration is even voiced by former inmates and guards of Alcatraz.

In the course of its 30-year existence, the penitentiary received a total of 1,576 convicts. There were never more than 250 at any one time, even though there were 450 cells measuring about 10ft by 4ft. At times the number of guards and staff was greater than the number of convicts.

While most people come for the history or the novelty of seeing a former prison, the island is now a prominent area for nesting seabirds.

An easy, convenient, and time-saving way to see Alcatraz and some of the other highlights of San Francisco, like Fisherman's Wharf, Chinatown, and the Golden Gate Bridge, is to take a combined Alcatraz and San Francisco City Tour. If you have only one day to explore the city, and Alcatraz is on your must-see list, this guided tour is the best option. Alcatraz regularly sells out, so booking in advance is strongly advised.

Fisherman's Wharf is one of San Francisco's most popular tourist areas on Memorial Day. If this is your first visit to the city and you only have a day or two to see the sights, Fisherman's Wharf is one of the best places to visit. This old section, once the Little Italy of San Francisco, is known for its shops, restaurants, and beautiful setting along the waterfront. The views from Pier 39 back towards the city are exceptional.

It's a fun place to stroll around and get a taste for the city. From here, you can also take a sightseeing cruise for spectacular views of the city, or organize a fishing charter. The docks by pier 39 are some of the best areas in the city to see sea lions.

Some of the main attractions in the area are Madame Tussauds Wax Museum, Musée Mécanique, Ripley's Believe it or Not!, and Ghirardelli Square. Restored 19th- and 20th-century ships line the waterfront at the Hyde Street Pier, which is now the San Francisco Maritime National Historic Park.

The USS Pampanito, a national historic landmark, is a WWII submarine and part of the San Francisco Maritime National Historic Park. Pier 39, located in this general area, is home to more than 50 stores and unique places to eat.

Cable Cars were introduced in 1873 to help locals contend with the many hills the city is built on. Today, the few remaining cable cars offer tourists a great way to explore the city in historic fashion. Since 1964, these tram-like vehicles have had the unique distinction of being the only public transport system to be declared a historic monument.

The Powell-Mason and Powell-Hyde are the most scenic routes. The cable cars will also get you to the major tourist attractions on Memorila Day such as Fisherman's Wharf, Ghirardelli Square, the Ferry Building, Nob Hill, and Lombard Street. Tickets can be purchased onboard the cable car, or, if you are planning on more than a couple of rides or are going to be sightseeing for a few days, consider buying a pass.

Golden Gate Park, home to gardens and museums, is a fabulous green space in the heart of San Francisco, often considered the "lungs" of the city. Before development began in 1871, this was an area of arid dunes.

Today, the park has a network of walking trails and cycling paths, more than 5,000 different kinds of plants and dozens of species of trees, several lakes, bridle paths, and a buffalo paddock. The main attractions include the de Young Museum, the California Academy of Sciences Museum with Steinhart Aquarium, the Japanese Tea Garden, and the San Francisco Botanical Garden.

Golden Gate Park is one of those places that can just as easily take up a couple of hours as a couple of days. Bike rentals are available, and this can be a good way to explore the park, rather than trying to do everything on foot. Alternatively, try an organized 2.5-hour Segway Tour with a local guide, and hit all the major highlights during Memorial Day visit.

You may have been to Chinatown in other cities, but San Francisco's Chinatown is a whole other realm. It is both the largest Chinatown outside of Asia and the oldest of its kind in North America. Almost completely destroyed in the 1906 earthquake, Chinatown was rebuilt entirely in the Chinese style and was soon even more attractive than before the disaster.

Now with its temples, theaters, workshops, small businesses, stores, antique and souvenir shops, teahouses, and traditional pharmacies, visiting Chinatown has become one of the top things to do in San Francisco on Memorial Day.

If you are traveling through San Francisco during an important Chinese holiday or event, you can expect to see an elaborate celebration. Chinese New Year celebrations are often considered the best in North America. The main street in Chinatown for tourists is Grant Avenue, with the Chinatown Gateway at Grant Avenue and Bush Street.

If you don't mind a little exercise, you can do your own walking tour beginning in Chinatown with the help of our San Francisco Walking Tour.

An impressive Neoclassical Beaux-Arts building in an amazing setting, the California Palace of the Legion of Honor is San Francisco's most exquisite museum. The Legion of Honor was the gift of the socialite, philanthropist, and patron of the arts Alma de Bretteville Spreckels. Because of her love for all things Parisian, the museum was designed as a replica of the Palais de la Légion d'Honneur in Paris.

The Legion of Honor museum has a superb collection of European decorative arts, sculpture, and paintings, along with antiquities from the Mediterranean and Near East. Admission to this museum also gives you same-day admission to the de Young Museum.

The museum is in Lincoln Park, a gorgeous green space with a golf course and coastal woodlands and a wonderful place for a leisurely walk. Just outside the museum, visitors may follow the path along Lincoln Highway, which boasts spectacular ocean vistas and perfect outlooks onto the Golden Gate Bridge.

Those seeking a more adventurous hike can head to the Land's End Trail. This winding cliffside trail in a wild, rugged terrain offers sweeping Pacific Ocean views and panoramas of the Golden Gate Bridge.

The Palace of Fine Arts in San Francisco is the last remaining structure from the 1915 Panama Pacific Exposition. Listed on the National Register of Historic Places, this classical looking building is beautifully situated on a lagoon that reflects the mirror image on the surface of the calm water, while ducks and geese drift by.

The palace has been restored, along with the grounds, and today hosts art exhibitions and performances. The Palace of Fine Arts Theatre seats approximately 1,000 patrons. 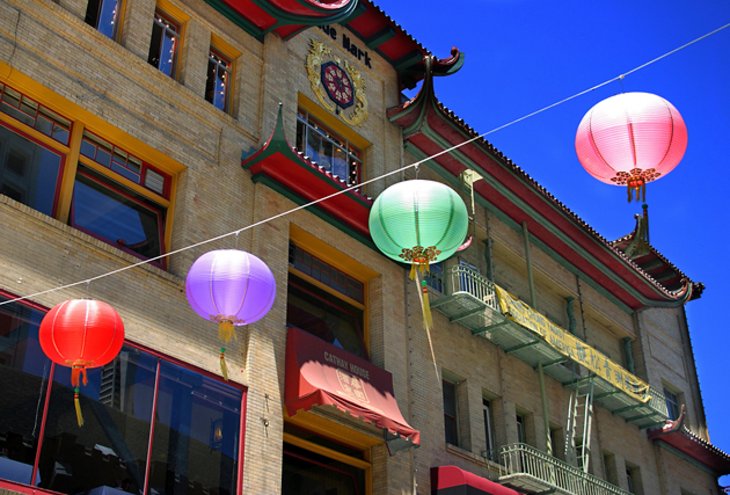 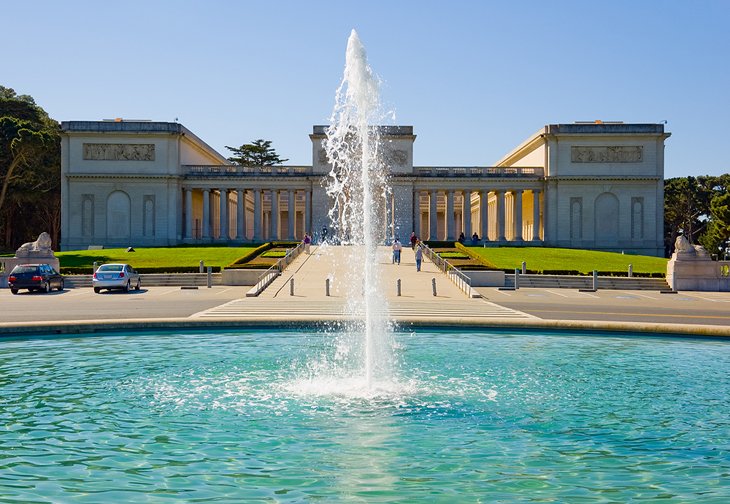